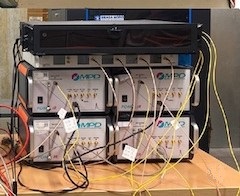 Here we present a field-trial which exploits a low-complexity self-stabilized hardware and a novel synchronization technique, to perform QKD over optical fibers deployed in the city center of Padua, Italy. In particular, two techniques recently introduced by our research group are evaluated in a real-world environment: the iPOGNAC polarization encoder was used for the preparation of the quantum states, while the temporal synchronization was performed using the Qubit4Sync algorithm. The results here presented demonstrate the validity and robustness of our resource-effective QKD system, that can be easily and rapidly installed in an existing telecommunication infrastructure, thus representing an important step towards mature, efficient and low-cost QKD systems.

In a run lasting one hour we accumulated a total of 2.7·10^8 received qubits, which formed the raw keys. In the post processing phase, we computed the quantum bit error rates (QBERs) QK and QC in the key and control bases respectively (shown in Figure) whose overall averages were 2.0% and 1.1%. The analysis of the temporal distribution of the detection suggested that only a 0.5% contribution to the QBER is due to noise (afterpulses, background light, dark counts), with the rest being attributable to alignment mismatches between the polarizations of the prepared states and the measurement bases. We also noticed a slight increase in QK during the hour-long acquisition and we attribute it to poorly compensated polarization drifts in the channel.

The post-processing algorithm produced approximately 4·10^7 secret key bits, corresponding to a secret key rate (SKR) of 11.5 kbps. In this work we have reported the development and in-field testing of a polarization-based QKD system implementing a simplified three-state and one-decoy BB84 QKD protocol. By exploiting a self-compensating design for both the intensity and polarization modulators, the setup proved resilience to vibrations and temperature fluctuations. In fact, the setup did not require any recalibration after transportation from the assembling location to the final locations and was able to generate quantum-secure cryptographic keys immediately after installation.