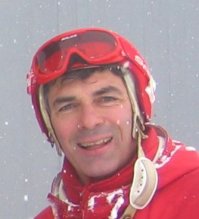 Research activities:
- Experimental Quantum Communication - Q-Space Experiment 2003-2006: First Demonstration of single-photon link between a satellite and the Earth - Principal Investigator of ASI SpaceQ project (2007-2008), to study a dedicate satellite for quantum communication in Space. Principal Investigator of University of Padova QuantumFuture project (2009-2013), on the frontier of free-space communications. - Quantum Communications from a satellite: First demonstration of the faithful transmission of generic qubits along a satellite link. We reported for the first time the successful realization of QC encoded in the polarization of single photons from several satellites. Qubit pulses are sent at 100 Mhz repetition rate from ground to Space and are reflected back from selected satellites equipped with corner-cube-retroreflectors able to preserve the input polarization. Due to uplink attenuations, the pulses reflected from the satellites have an average photon number close to one. Nanosecond synchronization was performed by exploiting the bright MLRO 10 Hz pulses, usually devoted to satellite-laser-ranging. Qubit-error-rate (QBER) was found to be at the level of a few percents. This result paves the way to the development of quantum protocols along Space channels. (Physical Review Letters 115, 040502, 2015 - arXiv:1406.4051).
The Quantum Interference along a space channel is the latest report from the QuantumFuture Group, which demonstrated the use of temporal modes of the photon in a polarization-insensitive link from a satellite to ground (Physical Review Letters 116 (25), 253601, 2016 - arXiv:1509.07855).
- Experimental study of the interaction of matter with radiation, in the area of ultrashort and ultrafast laser pulses: strongly nonlinear optical effects as high-order laser harmonics generation and optical ionization; phenomena depending on the absolute phase of the radiation, asymmetry in the multiphoton ionization, researches in the generation of attosecond pulses.
- Applications of lasers to Medicine and material processing: adaptive optics for the interaction optimization, advanced optical systems for semiconductor lasers, laser surgery of lung, laser dentistry.

Member of the Institute for Photonics and Nanotechnology of the CNR (Padova unit) and of its Research Board until 2015.

Served as coordinator in several national and international research projects, including the area of high order harmonics generation, space quantum communication, application of laser in Medicine and Industry.