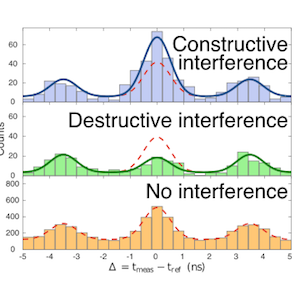 
Interference of quantum objects has been a key ingredient in the description of microscopic world since the early development of Quantum Theory. Testing the predictions of Quantum Mechanics in Space, over distances larger and larger, allows to extend its validity limits on a scale at which it was originally not meant for. Furthermore, exploiting quantum technologies in Space could have great implications for secure communications at global scale and for testing Einstein’s gravitation one more time. Here, we demonstrated interference at the single-photon level along optical links between the Matera Laser Ranging Observatory (Italian Space Agency) and different satellites thousand kilometers away. Two short pulses of light delayed by few nanoseconds are sent to the satellite which bounces them back to Earth where they are collected at the single-photon level because of the long journey. At the reflection the satellite introduces a phase-shift between the two pulses, due to its relative velocity respect to the ground station. When the photons are temporally recombined at the receiver, they interfere accordingly to the modulation imposed by the satellite motion.