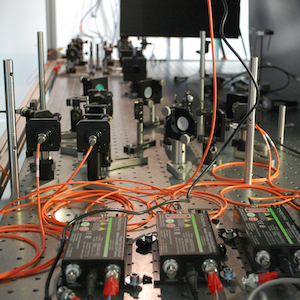 1Department of Information Engineering, University of Padova, via Gradenigo 6/B, 35131 Padova, Italy


Exchanging unconditionally secure cryptographic keys by means of a free-space quantum channel is possible even under realistic conditions, that is, in the presence of environmental noise and with the transmission of a limited number of photons, as for Satellite Quantum Communications.
In their work, just published on Nature Communications, Davide Bacco, Matteo Canale, Nicola Laurenti, Giuseppe Vallone and Paolo Villoresi, all with the Department of Information Engineering at the University of Padova, have experimentally proved the feasibility of Quantum Key Distribution (QKD) in such conditions and by considering different attack models.
This result opens perspectives for scenarios where the transmission window is limited by physical constraints, as for Satellite Communications, where the passage of one terminal over the other is restricted to a few minutes.

The work has been carried out within QuantumFuture, one of ten Strategic Projects funded by the University of Padova in 2009. Coordinated by Prof. Villoresi, the project has established the Quantum Communication Laboratory and engaged four research groups in a joint activity: Quantum Communications, Quantum Control Theory, Quantum Astronomy and Quantum Optics.

Prof. Villoresi, principal investigator of QuantumFuture, says: “A huge amount of sensitive data travels every day on the internet: credit card numbers, emails, medical reports, social network contents, etc. Such traffic is constantly increasing on a global scale, and data protection is becoming not only a privacy issue for the individual, but also an economical and national security asset. Quantum Key Distribution is an outstanding way for providing two parties with unconditionally secure keys, which can then be used in any cryptographic protocol for ensuring security services. Current commercial QKD devices rely on a private fiber optics infrastructure, involving extremely high costs and a network topology whose complexity exponentially increases with the number of users. Moving to free space, and, even more, to Satellite QKD, would open the way to an extensive use of QKD, and this is the focus of our research. ”

In fact, the Padua team has been active on Satellite Quantum Communications for years, and obtained the first experimental demonstration of single photon exchange with an orbiting terminal in 2009. In this new work, the team of Padova used a new approach, which has been recently proposed by a Swiss research group, for quantifying the secret key bit rate achieved with an experimental transmission of quantum bits (qubits). The team evaluated the secret key rate depending on the ambient noise and on the assumed attack model.

By leveraging the laws of quantum physics, two distant parties are able to share cryptographic keys with unconditional security, i.e., on which the eavesdropper has a provably negligible knowledge. If single photons are used as bit carriers, when the attacker tries to read them during the quantum transmission, he introduces a perturbation, thus allowing the legitimate users to estimate the information that he may possess and to take the appropriate countermeasures (e.g., discarding the current key). On the contrary, classical cryptography – which is currently used for securing information – allows for a passive eavesdropper to go undetected and is rather based on mathematical problems for which no efficient solution exists nowadays. However, it is still possible that mathematical and computational breakthroughs or the development of quantum computers will allow to break classical cryptographic systems, while QKD represents a provably secure long-term solution.
In research laboratories, QKD systems are deployed in isolated environment and assuming that an arbitrarily high number of photons can be exchanged. However, in real world applications these conditions are no longer verified. In realistic scenarios, in fact, the ratio of the final secret key bits to the sent photons decreases both with fewer sent photons and with increasing noise in the transmission channel and in the receiver apparatus.

The experiment of the Padua team shows the actual possibility of exchanging secret keys in free space between distant parties, even in the presence of  a significant amount of noise and by sending a limited number of qubits.